Fuji Heavy Industries Ltd. (FHI), the manufacturer of Subaru automobiles, announcing the start of production of the all-new 2017 Subaru Impreza in its U.S. plant, Subaru of Indiana Automotive Inc. (SIA). 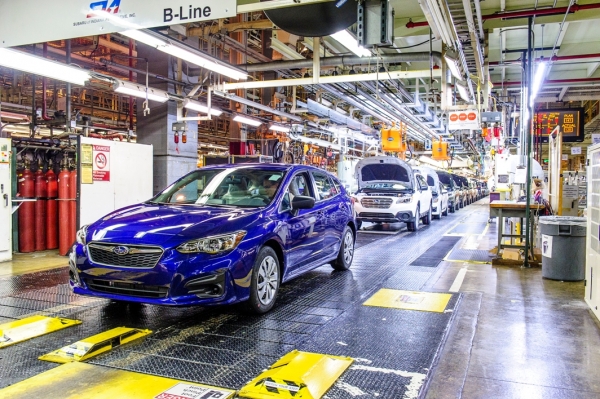 On November 1, 2016, the first-ever American-made Impreza rolled off the assembly line and SIA held a line-off ceremony with attendance of President Toshiaki Tamegai and Associates.

The Impreza had historically been produced only in Japan. FHI decided to move the production of the Impreza to the U.S. because of increasing American demand for Subaru vehicles, evidenced by eight consecutive years of increased sales in the U.S., as well as the high level of operational and production quality the plant has demonstrated over its nearly 30-year history.

SIA builds the Subaru Legacy, Outback and Impreza mainly for the U.S. and Canadian markets. It will add Subaru’s all-new 3-row crossover SUV to its production line-up in 2018.
To keep up with growing demand, SIA will increase its annual capacity from 218,000 to 394,000 units by the end of this year. The capacity will further grow to 436,000 units by March 2019.

An industry leader in environmental stewardship, SIA was the first auto assembly plant in America to achieve zero landfill status, and SIA’s entire 832 acre site has been designated a Backyard Wildlife Habitat by the National Wildlife Federation.